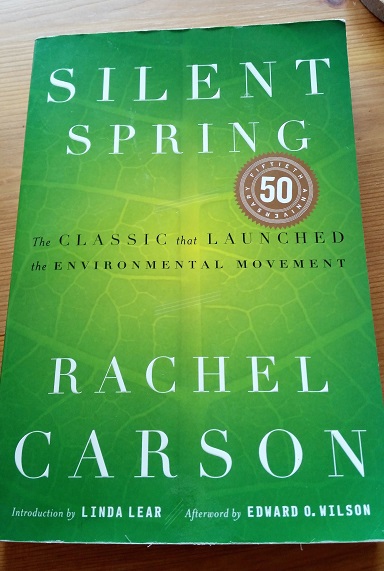 Hello there! Now that summer’s in full swing here in Ontario, it’s been a bit more of a challenge to find time to sit down and write. We only get so many days here when going outside with exposed skin is an option, and this Southern girl needs to drink up all the sunshine she can. As far as desk productivity goes, thank goodness for rainy days!

I’ve talked a few times about a remarkably intelligent and inspiring woman named Rachel Carson, known by many today as the mother of the environmental movement. Today, I’d like to take you for a bit of a throwback and discuss how her most notorious work, Silent Spring, made me question what I thought I knew about organically grown produce and reignited my love for the natural world.

Unlike a lot of folks in the conservation community, I didn’t cut my literary teeth on field guides, trail reports, or even Tolkien-esque tales of adventure in natural, albeit a bit fantastic worlds. My first loves were Austen, Brontë, and Dickens; my nose was buried in volumes about Jane Eyre, not Jane Goodall. My affinity for the classics, while keeping my head often in the clouds, has also fostered my heartfelt appreciation for good prose. Though Silent Spring was written by a career scientist, the first thing that struck me about the book was the unmistakable quality of the writing. Carson’s work is packed full of relevant and scientifically sound information, but she manages to weave it all together into series of compelling vignettes that communicate the effects of pesticide use to the general public. With it’s engaging style and beautiful illustrations, Silent Spring artfully brings together the literary and the ecological, explaining to non-scientific readers how chemical pesticides can enter the food chain, wreaking havoc on ecosystems, worsening future infestations, and sometimes even causing health affects for local human populations.

As some of you may guess, I wasn’t quick to jump on the organic bandwagon. For most of my adult life, I believed that organic produce and merchandise, especially organic clothing etc., were simply a marketing ploy to get health-obsessed people to pay more for the same goods. While heavy exposure to the neurotoxins used as commercial pesticides can certainly be harmful, I’ve found little on the long-term effects of pesticides that accumulate in the average consumer’s body through eating  conventionally grown produce, especially if we properly wash and prepare our food.

After reading Silent Spring, I followed up with a little research of my own and began to realize how shamefully narcissistic this view is in the grand scheme. Carson describes, sometimes in painful detail, the ecological consequences of widespread chemical pesticide use. Although most of these chemicals break down relatively quickly and leave only trace residue on the produce itself after a short time, these chemicals enter the food chain through a process called bioaccumulation. These chemicals become exponentially concentrated as they travel up the food chain the same way mercury and other heavy metals become stored in the tissues of predatory fish, like tuna. The higher you go on the food chain, the more disastrous the effects, such as those of DDT. This substance was widely used as an insecticide in the United States during the 1940s and 50s, and wrought havoc on predatory bird species populations, many of which are still endangered today, nearly four decades after the 1972 ban on commercial use.

Things are undeniably better in North America now than they were when Silent Spring was published in 1962, At this point in our history, it’s imperative to remember how bad things were when Silent Spring was published in 1962, especially for those of us who weren’t there to see it first hand. Carson describes large-scale mortality events after crop dusting: dead birds littering the ground in nearby neighbourhoods, acutely effected by direct exposure to the neurotoxins or by consuming insects that had been exposed. Along with the individuals who immediately perished, the following season’s songbird nests were filled with eggs that would never hatch. What would a spring be like if there were no birds to sing at all?

Things are undeniably better in North America than they were when Carson put pen to paper, but Silent Spring forces us to recall how hard people had to fight for the federal regulations that are in place today to protect the environment as well as the general public. It made me think differently about the consequences of how the food we eat and the goods we use are produced: whether they have immediate effects on our bodies, they certainly impact our world.

On the whole, I believe organic farmers and producers are taking up the mantle, trying to figure out ways to feed and clothe the people on this planet with the lowest possible impact. Or, I’d like to believe that, anyway. In today’s consumer society, especially with current eco-friendly trends, it’s important to realize that simply trusting a label may not be the answer. Whether conventional or organic, farming is still a business, first and foremost, that has to make money to support itself. I choose organic goods when I can in hopes that by doing so, I’m supporting outfits whose values regarding the importance of lowering the impacts of food production, including water and land use, as well as encouraging ethical labour and trade practices, mirror my own. However, without researching each individual supplier, I acknowledge that it’s a roll of the dice.

It’s also impossible to talk about choosing organic without mentioning price. There’s no way around it: organic production is more expensive than conventional production.  Few of us can afford to buy exclusively organic, but everyone can take steps to help reduce the amount of chemical fertilizers and pesticides we introduce into the environment and our bodies. If you’re thinking of starting to make the switch, or if you’re like me and looking for ways to do better without breaking the bank, check out this list of the Dirty Dozen and the Clean 15, which can help you figure out how to cut the most chemicals from your produce bags while going a little easier on your wallet.

My next conundrum: is buying organic still worth it when the produce is wrapped in single use plastic? If I figure that one out, I’ll let you know.

Kim is a writer and nature-lover who lives, works, and plays in Ontario, Canada. She holds a Masters in English Literature and maintains a deep sense of wonder and appreciation for the natural world that inspires so many of us to create. View all posts by Kim Lopshire-Fitton